Jagdish’s journey to the holy city Haridwar (based on the novel Sacred River: A Himalayan Journey by Debu Majumdar)

In Sacred River, Jagdish, a laborer-farmer from a remote village, Sitamarhi, in India went on a pilgrimage that concluded at the Gangotri temple in the Himalayas, where other characters from the novel also converged. I describe a little, but mostly show by pictures, his life journey from Sitamarhi to  Haridwar, Gateway to God, his last stop before Gangotri.

When Jagdish came into this world, Sitamarhi was a quiet little place. No passenger trains passed through town and bullock carts were the main form of transportation. Located on the Gangetic Plain, the land was fertile, and the elevation of the area nowhere exceeded 200 feet above sea level. The Bagmati River, a tributary of the Ganges River, ran through Sitamarhi; it was the creator and destroyer of the place. It made Sitamarhi beautiful and serene—a flat green farm-country as far as the eye could see. Large trees grew all around, especially fruit trees—mango, jackfruit, and guava—and almost every house had a grove of banana plants. Only dirt roads, wide enough for a bullock cart, and straw-roofed mud huts broke the green landscape. 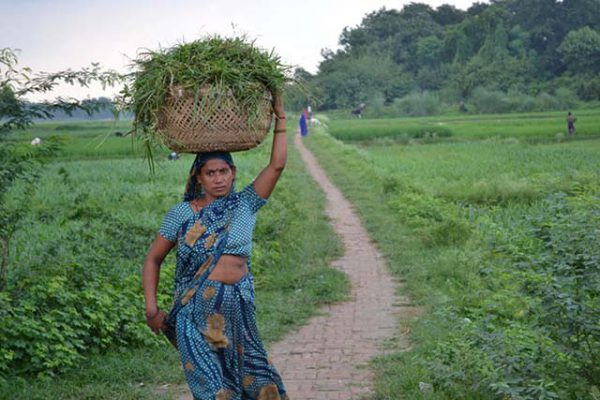 The green village where everyone worked just to survive

Sitamarhi was green all around because of fertile soil brought down by the rivers and monsoon rains. This made the villagers predominantly farmers and farm laborers. Formal education was not important in Jagdish’s time, and they lived a meager life. When Jagdish worked in farms, he got paid in grain. The villagers walked everywhere on dirt roads and brick paths. Most of them did not have carts or animals to pull carts and carried their burdens on their heads for miles. The market was only a few small hut-like houses.

The center of the village, a few miles away, always looked busy because that was the place people went for everything.

The day Jagdish was born on January 15, 1939, a severe earthquake occurred, and that was how he got his name, Jagdish, the Lord of the world, because as a defenseless baby, only the great Lord could survive such a calamity. The earthquake was so bad that even Gandhi visited the area to comfort people.

His father built a one-room house, but they barely had enough to eat; there was no luxury in their day-to-day living. They didn’t even have enough kerosene oil for the hurricane lamp to provide Jagdish light to study at night. Jagdish spent an uneventful youth. Life was mundane, but he did not endure severe hardship.

“If you live a good, moral life,” his father had often told him, “God will give you a better lot in your next birth.” This belief in God had carried him and his father through life. Only, he lamented, his father’s great wish for a pilgrimage hadn’t come true. His father had told him about so many places! Yet his father could never afford to leave Sitamarhi. Would the same thing happen to him as well?

His father died suddenly when he was only sixteen and Jagdish became a farm laborer. He got married two years later, bought a piece of land with the dowry money, and, in a spirit of ‘now or never,’ started growing vegetables. A son was born, the only joy of Jagdish and his wife. 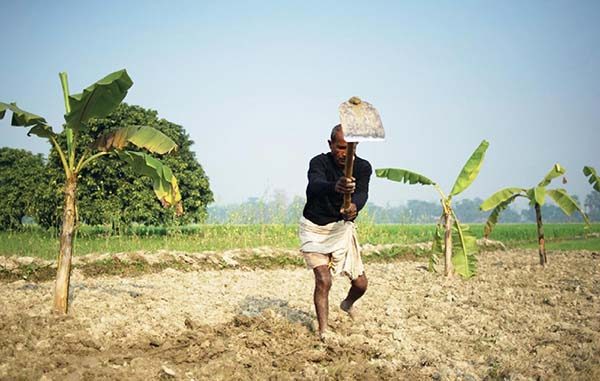 Jagdish worked hard on his piece of land

Then came the devastating flood that destroyed his dream of life as an independent farmer. 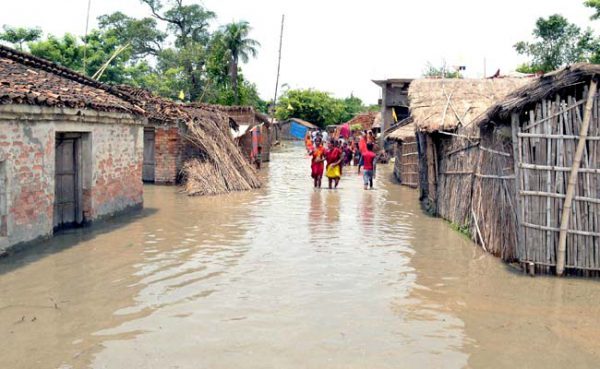 His crop failed, ruining him and he became a bonded laborer to the rich man of the area.

Many years later, he received some money from the government and started on a journey to fulfill his lifelong desire for a pilgrimage to the holy lands of India. 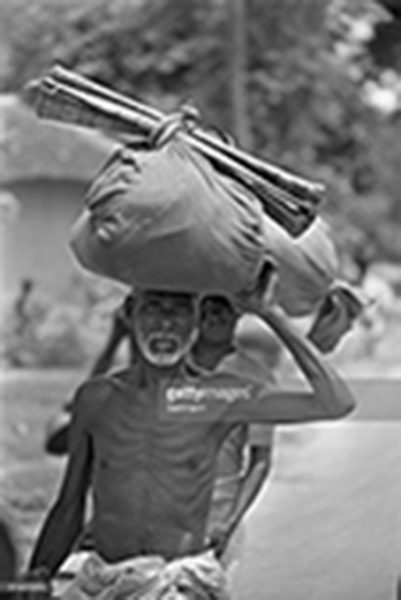 Finally, on the pilgrimage

Immediately after reaching Haridwar, the holy city, Jagdish saw a Shiva statue in front of the train station, blessing travelers as they hurried in and out.

A snake coiled around his neck. A circular flower garden surrounded the statue and a sign, hung on the low metal fence, said “Northern Train Station,” but he could not read it. The blue Shiva was so beautiful! Jagdish had never seen such a huge and gorgeous Shiva. Devotion welled up within him, and tears came to his eyes. “I’m in front of God in the holy land!” He sat down on the cement pavement and folded his hands in prayer. 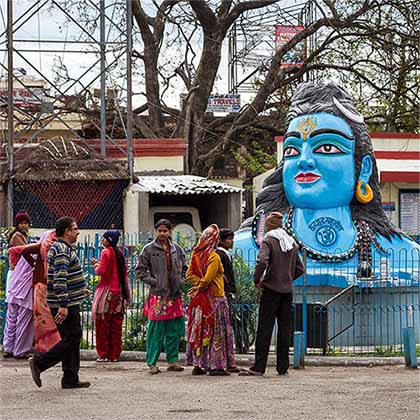 Then he walked along the only road to the sacred river.

The road was straight with buildings chock-a-block on both sides. It reminded him of crowded Old Delhi where he had been a few hours before. Saris and other cloth hung from balconies to dry. Signs, which he couldn’t read, hung on ground floor stores, advertising ‘clean and cheap’ rooms above. Several restaurants had pictures of various food items—cooked in both north and south Indian styles. 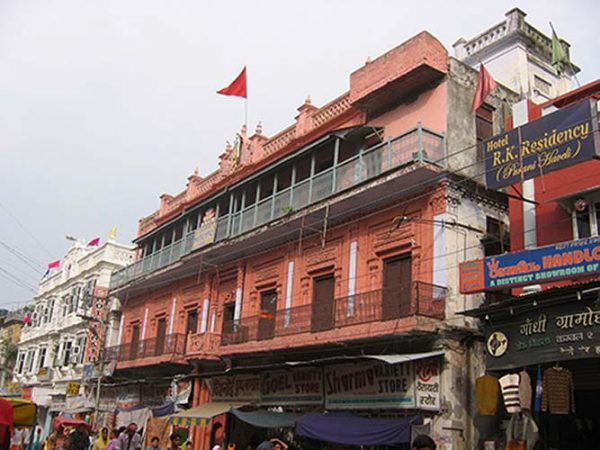 On the road to the sacred river in Haridwar.

Temples on the river:

As he reached the river, a panoramic view opened up before him.

He walked to the broad cement bank of the river and looked across. The opposite bank was cemented as well and there were many people there. The stream was about 100 feet wide, but the current of the muddy brown water was so strong that a chain was fastened securely along the riverbank in case someone fell in. More chains lay across the river under the bridge from one bank to the other.

This is the holiest place in Haridwar where pilgrims bathe in the sacred Ganges River to wash away their sins.  Small flower boats made with large leaves are floated down the fast-moving river as a part of pilgrim’s worship service. Lighted candles burn in the centers of the flower boats.

A flower boat on the river

As Jagdish stood on the bridge over the river, the sun disappeared behind the buildings. Men and women crowded a small space under a white clock tower on the opposite bank. The time for Maha Aarti was near. More men and women came and lined up along the banks and on the bridge. Many sat on the bank and swung their feet in the water. Soon it became dark and Jagdish couldn’t distinguish the faces under the tower. People started to release leaf boats on the water. The lights of tiny candles and oil lamps on the boats glowed as they traveled down the river. Suddenly, conch shells and bells started to sound from the surrounding temples and from the tower. Then small, lighted leaf boats flooded the river—all glittering in the dark, bobbing up and down and moving with the current. A lighted river flowing toward the sea. Jagdish loved the scene. He heard the Aarti song starting in the distance. Everyone joined in the chorus. Jagdish could not help but sing along and the devotional chorus roared up toward the heavens, lifting everyone’s spirits together.

Jagdish finally made the pilgrimage that his father longed for, but could never achieve. He spent seven blissful days in Haridwar, and then boarded a bus toward Gangotri.

If you wish to buy a copy of the novel Sacred River: A Himalayan Journey, please click here.