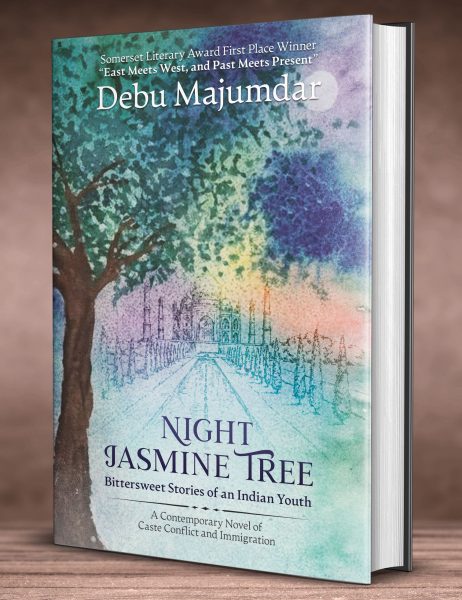 Night Jasmine Tree,  Debu Majumdar’s latest novel, is about the hidden backstory of an Indian man’s immigration to the U.S.—a story of one man’s rebellion against conservative caste barriers, sacrifice, loss, suffering, and finally rising and becoming a better man.

Shankar, now a retired college professor in New York, was raised in a conservative Hindu family but fell in love with a lower caste girl in college and that love forced them to leave India. He vowed to forget the family that rejected him and never return. All his life he hides his past story – not even telling his own son. In his retirement, however, as he charms his grandchildren with stories from his childhood, his suppressed feelings of sadness, anger, and dismay bubble up. To read one of these stories, click here. He regrets his betrayal of his family and forsaking all his responsibilities. His sense of bewilderment and suffering increases. The novel is about how he was finally able to come to a resolution.

The novel’s story-within-a-story style is reminiscent of the storytelling in ancient Indian epics like the Mahabharata, creating a welcome layered complexity.

A richly layered novel of immigrant stories, steeped in memories of an Indian childhood.

Great for fans of: Jhumpa Lahiri’s The Lowlands, Arundhati Roy’s The God of Small Things.

… a magnificent, fully realized, and deeply moving novel. … Night Jasmine Tree is thought-provoking and beautiful beyond measure. It does what great literature does – moves the reader to consider one’s own life in a new light.

What Reviewers are Saying

A Somerset-award winning novel, Majumdar’s Night Jasmine Tree follows the bittersweet journey of an Indian youth from his hometown in Bengal to life in the United States. Narrated in a succession of flashbacks, the story begins with Shankar, now a grandfather comfortably settled in Bellport, New York, telling his grandchildren about his own childhood spent in a tiny village on the outskirts of Calcutta. With each flashback, Majumdar offers deeper insight into Shankar’s erstwhile life, and why he chose to leave it. Shankar fell in love with Durga, a girl from a different caste, upsetting his conservative Hindu family—his father refused the match. In anger and frustration, Shankar decided to sever all contact with his family and emigrate to the US to build a new life for himself. Night Jasmine Tree tells that tale but also a larger story of reconciliation between past and present, love and family, East and West.

The novel unfolds in a series of smaller stories that Shankar tells his grandchildren. In these tales of small town life and piquant mischief, Majumdar layers in the innocence and intrigue that is characteristic of children’s stories. We are told of snakes and frogs, magical men who don strange costumes, and princesses from old Indian epics. In the process, Majumdar paints a vivid picture of India, replete with descriptions of festivals, foods, and customs. Over the course of the novel, Majumdar succeeds in relaying the insidiousness of caste and its discriminatory effects in Indian society.

At times, the nostalgia can give way to sentimentality. However, for the most part, Majumdar weaves a clear-eyed narrative that draws the reader in with its unfamiliarity and innocence. The novel’s story-within-a-story style is reminiscent of the storytelling in ancient Indian epics like the Mahabharata, creating a welcome layered complexity. Lovers of immigrant stories and tales of childhood will enjoy this novel that is a nostalgic remembrance of a simple childhood and its eventual loss.

Takeaway: A richly layered novel of immigrant stories, steeped in memories of an Indian childhood.

Great for fans of: Jhumpa Lahiri’s The Lowlands, Arundhati Roy’s The God of Small Things.

Production grades
Cover: A-
Design and typography: A
Illustrations: N/A
Editing: A
Marketing copy: A

Shankar, a recently retired professor of physics, and his wife, Durga, have left Michigan to resettle on Long Island with their son’s family. While the migration from the Midwest to the East Coast is a small one, considering both characters moved from India decades before, the move spurs Shankar to ponder the life he left behind and to reassess his relationship with his sisters and parents. They’d hurt him deeply when they rejected his wife because she wasn’t a Brahmin, and that pain sustained years of estrangement. Now, however, a letter from his sister causes him to reassess his own role in the dissolution of his family even as he enjoys spending time with his son, daughter-in-law, and young grandchildren.

Carefully organized, the novel is arranged into five parts with the comprising chapters designated with a time and place. Since the plot occurs on two continents, this framework is helpful to the reader. The author adroitly dovetails the past and present by having Shankar share stories of his own childhood with his grandchildren. And what stories they are! Sweet and funny, often involving animals, the children are riveted by their grandfather’s tales of a childhood spent in India. Shankar was a good student but not above getting into mischief or naively causing trouble. India comes alive for the children as they hear about an encounter with a tiger, the annual celebration involving kite fights, and a haunting but hilarious ghost story. The reader turns the pages as eagerly as the children beg to hear another story.

Consideration of Shankar’s past also involves his having grown up in a household in which the ancient traditions of Hinduism are sacred duties, and any failure to adhere to them a moral failing. It is difficult for Shankar to come of age wanting to do what makes him happy but feeling tremendous fear that he won’t live up to his father’s exacting standards. Will he become a “tejya putra,” a son who is rejected by his own father? There’s no worse fate for a Brahmin male. And, yet, shouldn’t his father love him simply because children deserve love, and not because Shankar will one day perform the essential funeral rites for his parents?

Regardless of how affectionate and attentive Shankar’s mother is toward him, he knows that she will always defer to her husband. She will let him dictate the terms of his sisters’ marriages, and she will never allow Shankar to disobey his father. The classic tension between duty and desire is artfully and affectingly rendered. All readers will be able to relate to the hold the past has on us. And like us, until Shankar resolves old animosities with his family, he’ll never indeed be free.

The author is a master craftsman of descriptive writing, especially when contemplating natural settings. Debu Majumdar deepens characterization by connecting Shankar’s interior and exterior worlds. While contemplating existence through his main character’s eyes, the author gives us a work of lush and searing beauty, wondrously told with compassion, empathy, and truth. Night Jasmine Tree is highly recommended reading for all.

Night Jasmine Tree won 1st Place in the 2018 CIBAs in the Somerset Awards for Literary Fiction.

This fictional novel of an immigrant, Shankar, from India to the US is powerful, engaging, and well written. Shankar’s recollection to his two grandchildren of his childhood and traditional stories from India help him re-examine his past, especially the events that led him to flee from his traditionalist family to the US. The book thereby combines these marvelous individual stories, with his time as a grandfather, and his inner reflection on his past.

The characterizations are solid and believable.

The cover is beautiful, although I never found a reason for the cover’s depiction of the Taj Mahal. I suspect it is only there as a universally recognizable symbol of India. This is perhaps misleading as Taj Mahal is a Muslim tomb; the story centers around the Hindu caste system – from different parts of the country.

The ending is pleasing and satisfying, with just enough twists that it held my interest while remaining faithful to the buildup. I wish the author had done a bit more at the end with the novel’s title, Night Jasmine Tree. The title does fit the novel’s story and helps make it memorable.

I’m a second generation immigrant, with grandparents from Italy. I found the Indian immigration conflicts to, of course, differ in the details from my family but with similar themes. The story’s in-between generation, Shankar and Durga’s son Samir, could have received more attention. The immigration and generational aspects of the novel were fascinating and believable.

I had the joy of visiting India in 2015 and found the country to flood my senses – sights, sounds, smells, taste, touch – as much as any of the 30 countries I’ve visited. The novel’s characterizations brought back many wonderful memories and creates new sensations. For example, the title, Night Jasmine Tree, evokes smell and sight. I would have liked to feast more in this book and wonder, for example, of some of the tastes, smells, and tactile feelings of foods and places mentioned in the story.

It happens that I read this novel concurrent with Rudyard Kipling’s The Jungle Book. Both are a collection of stories, the former woven together in Shankar’s story; the latter focused on several animals. Both are worth reading.

It also happens that I read the author’s first novel, Sacred River: A Himalayan Journey, about the time I read Kipling’s classic novel Kim. Both are fictional journeys and I recommend Sacred River over Kim for several reasons. Sacred River is written by a native of India; Kipling loved India but sometimes seems condescending to the Hindu majority.

I recommend this product.

It captures reality in a way that is more interesting as inviting than most other books I’ve read. I highly recommend it to anyone looking for a beautiful story.