Viku’s mother became very concerned when Viku told her what had happened. Losing a friend is a very hurtful thing, she thought.  Haatee was the only true friend her son had, and Viku loved Haatee very much.  She gazed at the forest – a beautiful forest, but so many cruel things happen there.  She knew Haatee was alive, but how could one rescue an elephant from the elephant-catchers? They were rough people.

Viku’s mother paced in their small hut.  Then she decided she would pray to Ganesh, the elephant-headed god. He is the god of success who removes obstacles.  That is why people pray to him before starting anything new – like opening a store in the morning for business or beginning a journey. She thought that Ganesh must be partial to elephants Vand would help her son.

She went out and collected flowers from their garden. She then sat down in front of the altar in the corner of her bedroom and decorated the statue of Ganesh.

She made a necklace of small, white blossoms and put it around Ganesh’s neck and put a red mark on his head.  It was a large head compared to his body because when Ganesh was a boy, his head was cut off during a fight.  He was revived with an elephant’s head. Viku’s mother put dots of sandalwood paste on Ganesh’s trunk.  She placed a small plate of sweet butter biscuits in front of Ganesh as an offering to him.

Then she prayed for a long time. 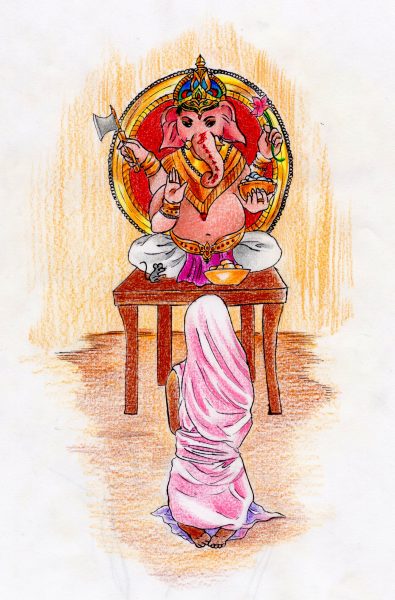 Buy  Viku to the Rescue .