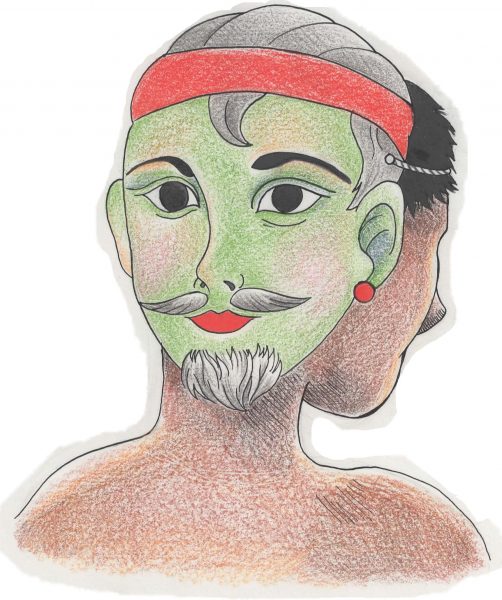 When Viku didn’t return home in the evening, his parents started to worry. This had never happened before. They knew he had gone to play with Haatee. Had Haatee taken him somewhere far away?

Viku’s father held his hukka-pipe in his hand and stared at the forest without smoking. Viku’s mother paced between the kitchen and the bedroom, folding and refolding her son’s shirts and pants.

The sun dipped over the horizon of the vast forest. Birds returned to their nests in the trees, their chatter filling the air.  Normally it was a soothing sound at the end of the day, but today their twitter disturbed Viku’s father. He worried that this was a dangerous time in the forest; hungry animals look for their last meal now. Two deadly animals came to his mind – Royal Bengal tigers on land, and crocodiles in the river.  Shapnobahn forest had many man-eating tigers. Every year they killed many woodcutters and fishermen. And the big crocodiles ate almost anything!

“We should have given him a mask,” Viku’s mother said.

Viku’s father nodded. He had not yet told Viku about the mask. A tiger won’t attack a man who faces it; so wearing a mask on the back of one’s head fools tigers. “I shall teach him to tie a mask,” he told her.

“He must also learn to read the signs of crocodiles in the river,” she murmured. “They move so quietly, and attack so suddenly.”

Soon the birds quieted down and darkness came. Viku’s father paced in front of the hut. He didn’t know what to do.  No one could enter the forest at this time. Besides, where would they go to look for Viku?

Viku’s mother put red and white flowers on the family altar and sat down in front of it. She prayed to save her son. Her vision blurred with tears. “Oh, my Viku!”  She started to cry. “Where are you, my son?”

She turned up the wick of the earthen lamp on the altar.  Then she took a banana leaf and bent it in the shape of a boat and stitched it with sticks. She put flowers from the altar in the boat. She searched the house, found a small candle, and placed it inside.

“Let’s go to the river,” she told her husband. “The river goddess will help us.”Viku’s parents walked to the river. They could barely see the stream, but the flowing sound comforted them.

Viku’s mother lit the candle and let the boat float in the stream. She said a prayer with folded hands. Viku’s father prayed silently.

The tiny leaf-boat moved swiftly in the stream. The flowers in the boat looked very pretty under the candlelight. The two gazed at the boat as it floated away in the distance.

Back to the Viku And the Elephant book page.