A long time ago, even before the time of the ancient epic, Mahabharata, there lived in India a king named Asvapati. For many years, he wished for a child but had none. He was a devotee of Savitr, the divine light of dawn, and prayed to him for a child. Pleased with the king’s devotion, Savitr granted his wish and a daughter was born to the king. She came to the world glowing like a bright sunrise. The king named her Savitri in honor of Savitr.

As she grew, Savitri became a beautiful, bright, and intelligent princess. When she attained the age of marriage, however, the nearby princes did not clamor for her hand. The king surmised that they were intimidated by her devotion to the Gods and her intelligence. He sent her on a tour around the region, telling her to find a man whom she wished to marry.

Savitri travelled around the then known world, guarded by the king’s army, and met many princes, but did not find a worthy man that she would like to marry. But she was not unhappy. Why marry someone if you don’t consider him good enough to love, honor, and cherish? As she was returning home, Savitri and her entourage camped near a hermit’s cottage. There she saw a young man carrying kindling and fruits. He was slim, tall and handsome. More than that, his steps exuded the glow of devotion to his duties. On inquiry, Savitri found he was prince Satyavan, who lived in the cottage taking care of his mother and blind father, a deposed king. Savitri fell in love with him.

But the blind king asked her, “Princess, can you live with us in the forest with a meager diet of fruits and vegetables and wearing no gorgeous clothes or ornaments? Can you spend your life as the wife of a hermit?”

Savitri replied that she did not care for comfort or hardship, in a palace or hermitage, if her family were pure in heart.

The blind king gave his blessings, but asked her to consult her father.

Savitri’s father was elated that his daughter had found a man to marry. He knew that when Savitri had chosen someone, he and his family must be worthy without any doubt. But when the king consulted astrologers, the sage Narada, who could see the future, told the king that Satyavan would die in one year and advised against the marriage.

“Father,” Savitri said when she heard the prediction, “I have chosen Satyavan to be my husband. In my heart, I am already married to him.”

Her father had to agree with Savitri and allow the marriage.

After the marriage, Savitri came to the forest hermitage and lived with Satyavan’s family, carrying out the duties of a wife and taking care of her in-laws. Time passed happily for the young couple, but soon the day arrived when Satyavan would die. She was the only one who knew it and she did not tell her in-laws. She wished to spend his last moments with him. She asked her in-laws if she could spend the day with her husband in the forest instead of in the cottage with them. She had never asked for anything; so they happily agreed to her request.

That day Savitri accompanied her husband everywhere. As he was cutting some dry wood for the daily yagna worship service, Satyavan suddenly had a severe headache and lay down on the ground with his head on her lap. Savitri caressed his head and saw him close his eyes and doze off. Then she saw Yama, the God of death, in the distance, walking toward them. Ordinary human beings cannot see Yama, but Savitri was so pure she could see Yama.

Yama told her, “The time has come for your husband’s death. No one can avoid death. This is the law of nature. Would you please move aside so I can take him?”

Savitri did what Yama asked her.

Yama slipped a noose around Satyavan’s soul, turned, and walked away. But Savitri could see Yama and followed him. After some time, Yama noticed her. “Princess, you cannot follow me. I see your distress, but I have to do my duties and take your husband. I am very pleased with your devotion and grant you a wish—you may have anything except the life of your husband. That I cannot give you.”

“My father-in-law has suffered from blindness for a long time, please give him eyesight.”

“So it will be. Now, please go back,” saying this Yama moved on.

Savitri continued following him. Yama stopped and asked, “Please do not follow me.”

“I follow where my husband goes,” Savitri replied, “that is where my place is.” She lowered her eyes. 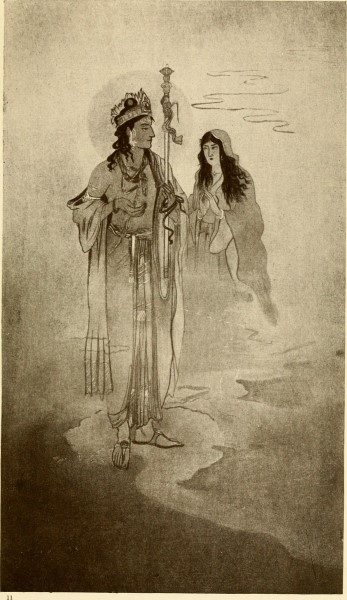 Yama and Savitri by Nandalal Bose (1913)

Yama looked at her and didn’t know how to tell her not to follow her husband. “Please take another boon from me,” he said, “but do not ask for your husband’s life.”

She did not ask anything for herself. She said, “Let my father-in-law get back his kingdom with its old glory.”

“That is done. Now please go back.”

But Savitri followed him. Soon Yama stopped and said “I am about to go beyond the realm of humans. There you will see only devastation. You should return to your family.”

“I shall follow my husband as long as I see a path where you are taking him,” Savitri firmly told Yama.

Irritated and lost, Yama said, “I cannot stop you from following your dharma, but please understand my role. When the time comes, I take the dead.” He looked at her heart and saw the purity of her soul, love for her husband, and determination. He had never met a woman of such virtue. “Please make another wish except for the life of your husband.”

“Please grant that my children will eat from gold plates.”

“Alright. That is done. Now go back to your family.” He hurried forward.

Savitri could see the tall figure of Yama with his lantern and the noose hanging from his shoulder where he kept her husband’s soul. She followed him. There was no question in her mind that she would not go where her husband went.

“I gave you three wishes,” Yama told her. “No one can get back a loved one after death. Why are you still following me?”

“You have granted me children,” Savitri said, “but as a Hindu woman, I cannot marry again. How could I have children without my husband?”

Yama realized he had granted this boon in a rush. There was no way he could take back his blessings. He had been defeated by the wit of this virtuous lady. But he was pleased to be defeated by such a pure and devoted soul and returned the life of her husband.

In the next instant, Savitri found herself sitting on the ground with her husband waking up on her lap. They soon went home and found their father with good eyesight, the house full of dignitaries from the old kingdom and jubilation all around. Savitri’s father was also among the guests to celebrate the restored king.

Did I forget to say they lived happily ever after?