Viku soon got used to his new routine. He enjoyed walking by the side of the forest to the school. He made several friends and liked playing with them during recess and learning new games.

After he returned from school, he had some time to play outdoors until the sun set. Then he studied by the light of a kerosene lantern until dinner time. 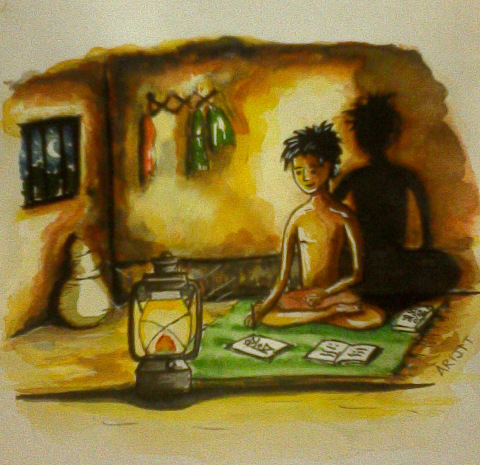 One Sunday, he wanted to show Haatee his school and rode Haatee along the path to the school. The school was empty. Haatee stood under the big mango tree in the school yard. Viku pointed out where he sat in the classroom.

On the return journey, Haatee left the path and went into the forest.
“Haatee,” Viku told him, “we have to go home now, not to the forest.”
But Haatee kept on plodding along. In a little while they came out of the forest and there was the river.
Viku got down and exclaimed, “This way is much shorter! How did you know this path?”
He patted Haatee and said, “Maybe you can take me to school in the morning?”
“Ahoo, Ahoo,” Haatee sounded.
Viku returned home very happy and excite. He could now meet Haatee in the morning and they would ride together to his school.